I met my best friend Natasha over a year ago back at UW. I was interviewing her for an international friendship program. She told us all about her likes and dislikes, her passionate stance towards animal rights and about her cat, Harry.

It only took me about a minute to decide I really wanted to be her friend.

Fast forward through a year of wine nights, vegan restaurants and movies at the Marquee… to me arriving in Madrid to study abroad. We cried at our “see you later” in May, even though we knew that we’d only be missing each other for a few months before we’d be able to see each other again. Sure enough, we were able to meet up again in November in Paris and I had the time of my life. Though only seeing your friend once when you know how close you are, isn’t enough and we talked of plans to meet up again soon.

I was really frustrated that I couldn’t visit Natasha for her birthday in December, as I was wrapped up in my finals at Complutense. Looking at my schedule, I realized that I only had one class in January and had long weekends to travel when I wasn’t in class. Lightbulb.

Why don’t I surprise Natasha in England? I knew she was going to visit her American boyfriend, Charlie, over break and would probably feel bittersweet about being back in England. It was perfect. I contacted Natasha’s sister and her friends to figure out her schedule that weekend. Obviously I didn’t want to try and visit her if she was planning to go visit her family or had a lot of homework to do. Once I got the okay from my co-conspirators, I booked a flight to Birmingham for a whopping 33€.

I treaded carefully over the next few months not to let my secret slip, making sure I renamed group chats so that I didn’t accidentally let slip to Natasha that I was going to visit her. We were all very proud of Soph, Natasha’s endearing but loquacious friend, for keeping the secret so long.

We kept talking about the vague date in the future that we’d get a chance to see each other…maybe in London, maybe in Madrid. As it got closer to the day I planned to show up in Royal Leamington Spa (if that’s not an English town name, I don’t know what is) I began to make deeper inquiries into her schedule.

“Hey, so what are you doing Friday afternoon? I figured we could catch up over skype?”

“Sure I just have to go to my Magic: The Gathering meeting that night, but other than that I’m free!”

The day I arrived, Natasha’s roommate, Rachel, picked me up from the train station with some news.

“So Tash isn’t home. She ran errands! I told her not to, that we could go together later, but she was determined to do it.”

I responded to Tash’s message about her running errands last minute from her living room, urging her to come home as soon as she could, though “I don’t want to be a bother,” I added. She agreed to come home ASAP.

Her roommates were kind enough to make me a proper ‘cuppa’ while I waited for her to come back. We were having a discussion about how adorable Barack Obama and Joe Biden’s bromance is when we heard the front door open.

“Oh good, kind of in a hurry,” she called from the hallway, “I’m late for my skype date with Lindsey–what the hell!?” She rounded the corner to see me sitting at the table, sheepish grin and all.

“Hey, hope you don’t mind me canceling our skype date, but I just really wanted to play Magic: The Gathering tonight.” After 5 minutes of hugging and asking if I wanted another cup of tea, we got back to talking as if a day hadn’t passed since we’d last seen each other.

We talked about what we wanted to do for the weekend. We had ideas of taking a day trip to London and such, but aside from a trip to Stratford-upon-Avon, Shakespeare’s birthplace, we ultimately decided to just relax in Leamington the majority of the trip.

I had a true English experience: fish and chips, many wonderful proper cups of tea and cornish style scones and gin and tonics in a pub (of which is my new favorite type of drinking establishment). 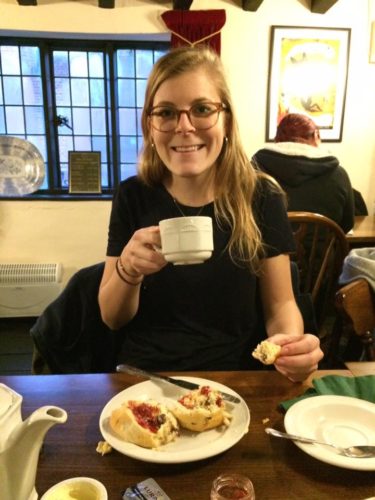 Tash was even able to drive me to Stratford in her cute little Fiat, and I am still sufficiently weirded out when I am in a car that drives on the left side of the road. I even had a chance to take a picture with the equally disgusting and iconic red phone booth. It wasn’t in London, but I didn’t need to be.

We finished up the weekend by grabbing lunch with her family and I was finally able to meet her younger sister Romy, who was about to leave to study in Maryland for a semester. I looked on as the two sisters hugged and hugged while I awkwardly hugged Tash’s dad (the Spain kissing thing is really messing me up and we had a weird bob and weave moment). It hit home to see her saying goodbye to her sister and reminded me that I still have a few more months until I’m able to see my family again. But with a little heart to heart (and Pinot Grigio) we remembered that a few months before seeing loved ones is nothing in the grand scheme of things.