Are you familiar with that feeling of overwhelming fullness and exuberance that accompanies the realization that you exist in a beautiful moment?  These moments occur to me perhaps more frequently than to others: seeing older people holding hands walking down the street, kids playing a pickup game in a Brooklyn neighborhood park, crocuses blooming in spring, families sitting on their stoops in the summer talking to their neighbors on the block, listening to The Head and the Heart play live at Red Rocks on a perfect August night. The frequency with which these moments hit me caused me a great deal of confusion when, after two jet-lagged days in Sydney, it had yet to dawn on me that I had moved halfway around the world for one of the greatest adventures of my life.  Just when I was beginning to question if I had lost my mind or passion, I looked at a train map, picked a stop called “Newtown,” and headed there late on a Tuesday afternoon. 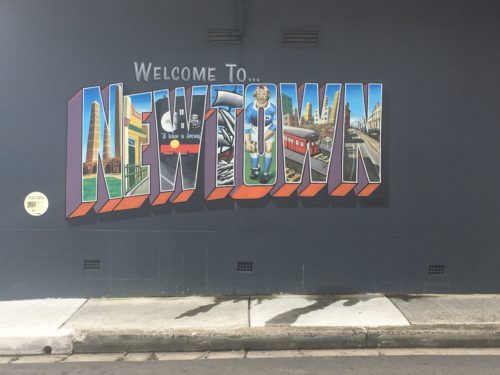 The people, shops, art, and music of Newtown, New South Wales presented everything I needed to find that elated feeling. Australia is home to the world-famous street artist, Fintan Magee, who I knew painted a piece in Newtown. After spending the majority of my early evening searching down side streets trying to find it, I finally came across it on Church Street, off of the main drag, King Street. 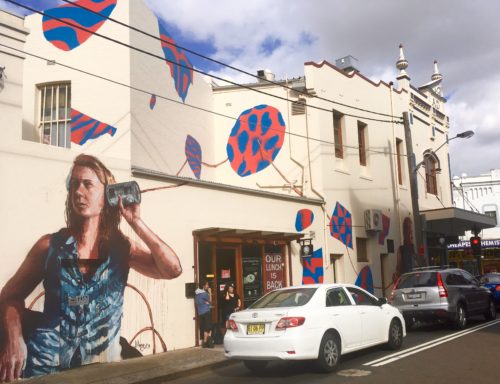 I continued wandering down Church Street, and another turn brought me to a delightful park that seemingly embodied utopia. Family and friends sprawled on picnic blankets across a sloping field, dogs and children ran amongst them, and a slack line was set up between two shaded trees. The place exuded contentedness during that golden hour before sunset begins, when the sun seems to shine the brightest and even the ugliest things look beautiful. I go there a couple nights each week now to write in my journal—which for the record, is where much of the material you read comes from.

Eventually, I wandered back toward the train station. As I neared the station, acoustic guitar and a man’s voice began to fade in. As soon as I saw their origin I found a spot on a wall where I remained seated until the sun set, listening to Direwolf’s indie-folkish tunes and observing backpackers, commuters, homeless people and families stop to listen, coming together in the moment to enjoy the evening. It was there, sitting on that wall watching the sun set over this funky town communing for this lovely evening concert, that I felt the fullness I’d been waiting for—a feeling I believe all of us deserve to feel at least once, but ideally quite frequently, in this life. 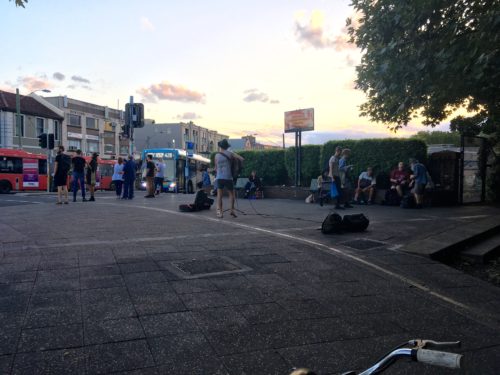 To end, I want to note that rather than focusing upon the Sydney standards like Bondi Beach, the Sydney Opera House and the Harbour Bridge, my blog’s focus will be primarily on the things less readily Googled—the side streets, the people, and the communities I am lucky enough to come across.

Stay tuned for tales of Byron Bay and a University of South Wales Outdoors Club trip chock-full of bushwalking, climbing, camping and whatnot in the Blue Mountains about two weeks from now!