My mom jokes that when I was younger, all anyone needed to do was jangle some keys and my brother and I would pack our backpacks and selves in the car within a few minutes. It’s true that I’m always itching to hit the road, frequently without a particular destination in mind. Back in America, it’s a bit easier. A 13-hour car ride will take you almost all the way to Madison to Boulder. Here in Australia, however, it will take you nearly 9 hours to travel just up a fraction of the east coast, from Sydney to Byron Bay, which is where I ended up last weekend.

Windows were down and “The Nosebleed Section” by the Hilltop Hoods was blasting from the hostel’s shuttle van as I climbed in. The driver was a kid from Seattle who’d been backpacking through Byron and decided to stay. He warned me if I spent too much time there, I’d never leave either. Rarely one to grow attached to a place, I laughed off his comment, checked into the hostel, threw on my bathing suit, and headed across the street to the beach. Little did I know that a bathing suit would constitute my daily attire for the next four days. 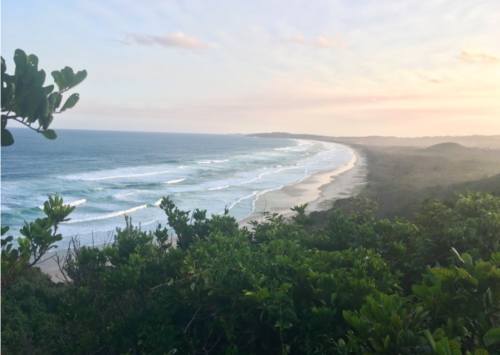 At that beach, roughly one hour into my five-day stay in Byron, I realized what Seattle had been talking about. To my left and right misty mountains rose out of the sea, and before me the most beautiful colored surf rushed up to the shore. Dogs ran freely through the water, kids built sandcastles, people of all ages surfed, and the stress instantly left my body. I was so content to swim in and out of the waves, it wasn’t until I finally turned towards the shore and realized I saw nothing familiar that I grew aware of the wicked rip current that had towed me about 400 meters down the beach. While I would usually try to swim against it back from whence I came, I instead turned towards the sea and let it take me until I finally decided to get out and walk along the shore back towards my bag. This experience served as a metaphor for the next few days in every regard—people visit Byron to slow down, be present, go with the flow and take life as it comes.

Cape Byron is the most easterly point on the Australian mainland and home to the Byron Bay Lighthouse. The trek from my hostel to the lighthouse took about an hour and a half on foot, and about half of it was on the beach. I headed up there for one sunrise and one sunset, which were both breathtaking. Looking out from the easternmost point, I was surrounded by the Pacific, and behind me to my left stretched Byron’s beaches and mountains. 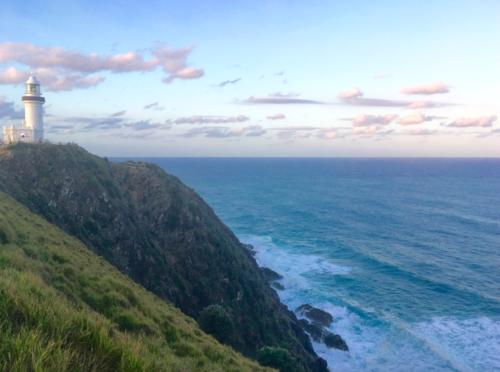 Nimbin, or Australia’s “alternative lifestyle capital,” is a tiny town west of Byron Bay renowned for its picturesque location and open support of legalizing marijuana. Downtown is composed of numerous bakeries and eccentric shops owned by locals. While eating lunch with another girl from the U.S. at a park picnic table, a few people at the table next to us casually offered to pass us the joint they were sharing. Bear in mind, recreational marijuana remains illegal in Australia, but Nimbin seems to be its own unique little world outside of general society nestled into the mountains.

A note about solo travel: Traveling solo has its high and low points, but I think one of the most exciting parts is its ability to open you up to new people and experiences. It’s nearly impossible not to hit it off with at least a few people while staying in a hostel. I was fortunate enough to wind up in a female eight-share with some phenomenal ladies, most of whom were backpacking Australia by themselves. Sometimes we came together to prepare meals, take day trips and go out, and we split up to do our own things whenever we wanted to. 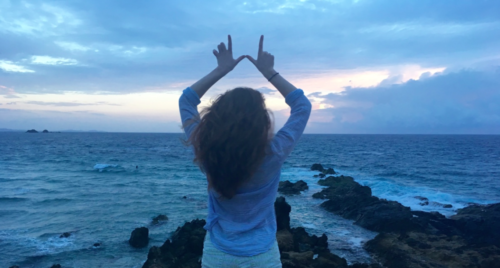 It’s curious that you can have some of the best times of your life with people who minutes ago were complete strangers, and then after a couple glorious days, part ways to carry on in your own directions, entirely uncertain of whether or not you’ll run into each other again. I felt torn between appreciating those beautiful times we had together and feeling sad they were coming to an end. In this world, though, one never knows. People run into each other in different hostels months apart, without having the slightest idea they would be in the same place until they got there.