It has been a hectic few days since I landed in Croatia, but I have been loving every second of it. I flew out of the Tangier airport at 11 p.m. and arrived in Barcelona at around 1 a.m. I tried to sleep a little during my five hour layover, but as with most cases with airport night layovers, sleep proved to be impossible. I boarded my plane to Croatia at 6:20 a.m., and the second I sat down, I immediately fell into a deep sleep until we landed at 9:00 a.m. Croatia time. From the airport, I took an easy 20 minute shuttle into town and walked 10 minutes to my hostel. Overall a very smooth travel day.

Once at the hostel I took a quick shower and set off to explore (and more importantly find some food). I flew into the city of Split which is in southern Croatia right on the water – most famous for its palace, stunning beaches and the fact that it was the setting for many “Game of Thrones” scenes. I spent the day walking around the whole city. It was really quite beautiful and very, very different then the Moroccan cities I had been exploring for five weeks. 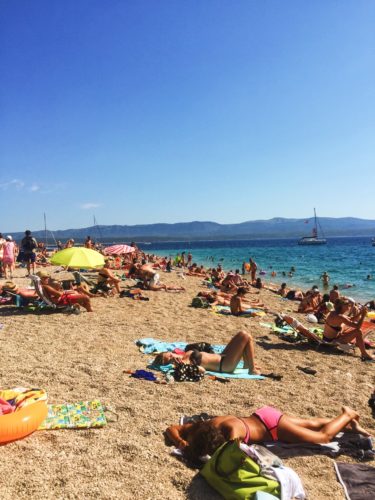 The next day, I went on an all-day boat tour through some of the most famous islands around Split. We took a super fast speed boat and blasted music the whole way – it was a lot of fun. I got to see the famous blue caves, cliff jump into crystal clear waters, wander the old streets of Hvar and visit the famous rock beaches of Vis. The tour took all day. By the end, I was spent, so I just relaxed with some of the people at my hostel in the evening. There was actually a girl from Wisconsin staying in my room! First Wisconsinite I have meet on my entire trip.

After two days in Split, I was eager to get away from all the hustle and bustle and into a more relaxing beach vibe. I boarded a ferry to the island of Brac, only a 50 minute ferry ride away from Split. From the port, I went to the hostel “Funkey Donkey” and arrived just in time to leave for the tour the hostel provided. We had a convertible and went to see all the major attractions on the island, such as an old olive oil plant, the highest mountain peak and two beautiful beaches.

On the tour, I became good friends with two guys from the Netherlands and decided to join them on their trip to the island of Vis. We set off at 7 a.m. to catch a ferry back to Split and from there over to Vis. Vis is a very small island with not many hostels, so we decided to get an Airbnb instead, which turned out to be the best decision ever. We lucked out and found an apartment located in the country side on a farm with a stunning balcony and all the free fresh vegetables we could eat!

We took a nap and spent the day at a private small beach. Then, it was off to the supermarket to get some pasta to go with our homegrown tomatoes for dinner. Tomorrow we plan on renting scooter and exploring the islands, many beaches and caves, so look forward to some awesome pictures to come.