It was the middle of June, and I was in Italy for the first time. I was spending the day in the Vatican City, starting with Pope Francis’ address. I was so excited, but it was blisteringly hot. My conservative maxi skirt/t-shirt combination clung to me in the humidity, my waist-length hair stuck to my face and neck. I couldn’t escape the feeling that standing shoulder-to-shoulder in crowded St. Peter’s Square, I was being suffocated.

I wanted the day to be perfect, so I ignored how I felt and pushed forward, eating some snacks I had in my purse and telling myself I was just a little hangry. After Pope Francis spoke to the crowd, my group dispersed and I decided to see the Vatican Museum. It was beautiful, yes, but it was hard to appreciate it when I wasn’t so much walking through the museum as being carried along by the crowd like it was a powerful river current. I craned my head to look up and around at my ornate surroundings, pressed against sweaty bodies on all sides as I was swept along in the sea of people.

Then I snapped. On the edge of hyperventilating, I shuffled sideways out of the crowd and into the cool stone corner of the room. I sat down cross-legged and tried to breathe, squeezing my eyes shut. I wanted everything to be fine. I wanted to enjoy every moment of the museum. But in that moment, I was not enjoying it. I was sitting on the floor of the Vatican museum feeling as though the air itself was crushing me, and I was not fine.

I know I’m not the only one to have had this sort of experience, but it’s often ignored when we talk about travel. We talk about the good moments: the incredible food, breathtaking sights and beautiful sunsets. Nobody wants to talk about sitting on the floor of a museum on the verge of a meltdown, but it happens, and it’s important to talk about it. Maybe then you won’t end up like me, or if you do, you might feel more prepared to cope with it than I did.

First things first: accept that no part of life is perfect, even trips to dream destinations

(No matter what social media tells you.) The things that scare you at home probably won’t disappear when you travel, although finding new confidence and bravery while traveling is pretty common. Things will go wrong in one way or another, but that doesn’t have to ruin your trip, or even your day.

Know yourself and make a plan.

The night before the incident in the museum, I took a spontaneous trip to the Vatican City to see it beautifully lit up and nearly deserted after dark. I can’t put into words how incredible that night was, and I was able to fully appreciate it because I wasn’t crammed into St. Peter’s Square like a sardine. If I could do that week over again, I would still go to the Papal Audience but save the museum for a normal, quieter day when I can better appreciate it. But it’s impossible to know everything that could possibly go wrong, and what kind of trip would it be if you only spent it dodging potentially uncomfortable situations? Which brings me to my last point…

Sometimes life just happens, and time spent traveling is too precious to waste agonizing over how you should’ve been tougher and powered through. Take a break. Eat something. Drink some water. Breathe. If all else fails, cut your day short and start fresh in the morning- whatever works best for you. And then let it go and move forward. You will be okay. 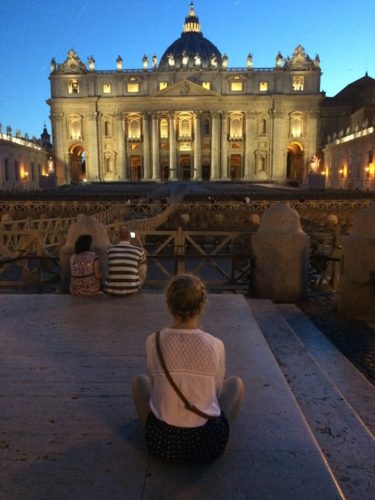