I decided to spend the majority of my break backpacking in Scotland because I realized my happiest times of travel have been either with great groups of people or being outside. My favorite vacations — probably almost all of my vacations as a child — were spent camping in Arches National Park, the Tetons, Yellowstone, Devil’s Tower and the Upper Peninsula. My parents were very outdoorsy, and I thank them for instilling this love in me.

The decision to hike the West Highland Way was thanks to Google: “Best backpacking in Scotland.” Not incredibly creative, but I now understand why this is one of the most popular backpacking routes in Scotland. Although I only made my way through three days of the seven day trail along the Eastern edge of Loch Lomond, I would not have done it any other way.

My trek began five miles earlier than expected; not all buses run on Saturdays, so I had to make my way to the trailhead on foot. The walk was incredibly stressful, there was no sidewalk to be found, so I became muddy and soggy quite quickly in the tall roadside grass. In all honesty, I became quite disheartened in my first hour of the journey.

But finally I came to the trailhead.

The first sign for the trail was weathered and wooden, pointing through a field surrounded by sheep, a picturesque line of trees on the horizon and spider webs glistening with dew, floating on pine trees. In an instant, all doubts disappeared. 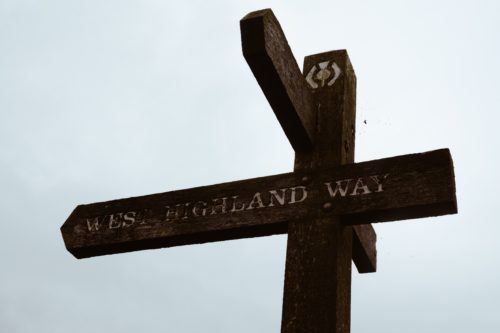 In the shady afternoon light, I was surrounded by a comforting muffled silence, enhanced by the stark grey skies contrasting the golden leaves littering the ground and ocher fields of long grasses spanning the moors. I walked for a few hours along these plains, acquainting myself with the rams and terrifying cows. Yes, you read that correctly — a girl from Wisconsin describing cows as terrifying. I turned a corner of the trail and there was a herd of at least 20 non-Wisconsin, non-passive, very alert, very aggressive cows. I later learned that at least 12 people each year die from being trampled by cows, so my intuitions did not fail me. My terror prevented me from taking pictures of said cows, but they are neat — from a safe distance — and have long hair. You should check them out. 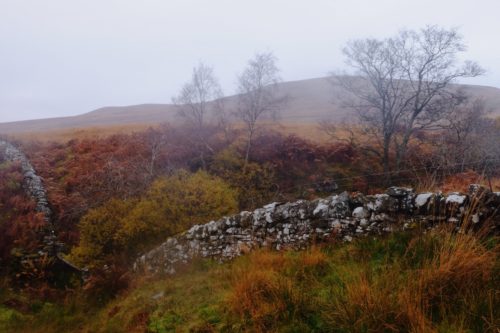 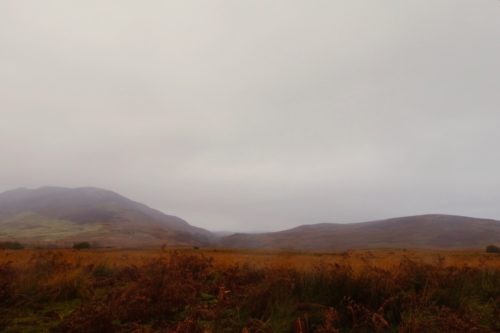 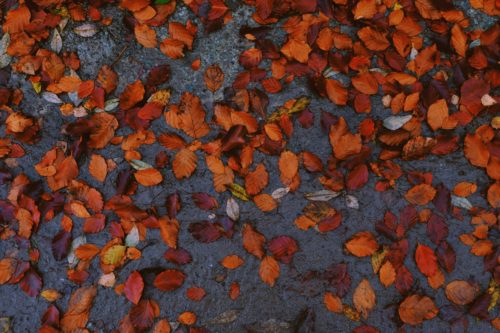 At the base of Conic “Hill” — it was a small mountain, I beg to differ with their definitions — stone steps stretched high into the sky, disappearing into clouds above. 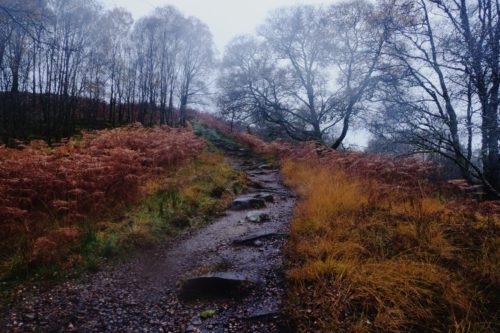 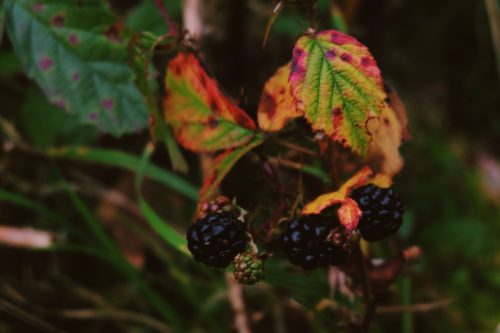 Because I had to walk an extra five miles earlier that day, the sky was darkening when I reached the top of my summit, and suddenly I was inside an alien world of dusky fog. Droplets clung to my skin and camera, and I could barely see six feet in front of me, but I was immensely proud of my accomplishment — achieved by means of copious sweating and swearing that luckily only the sheep heard.

As I finally reached the bottom of the hill with my flashlight in hand, I followed the lights ahead of me that revealed the tiny town of Balmaha. Drenched and exhausted, I deemed myself and the current lighting situation too much to find a place to camp and settled for a bunkhouse a few feet off the trail.The hostess eyed me skeptically, commenting about the end of season nature of my hike, but nonetheless  showed me to the bunkhouse containing a kitchen, fridge full of food, bunk bed and couches all to myself. I was so tired I sat on the floor for at least 15 minutes before making my gourmet tikki masala backpacking meal, which I enjoyed with copious amounts of cheddar cheese and crackers. I fell asleep at eight p.m., and slept almost 12 hours. What a day.

The next morning I rose early with the intent of hiking 20 miles, an overly ambitious endeavor, but you all know me. With the new day came my first views of the loch which did not disappoint. Skimming the edge of the loch for almost the whole trail, I encountered more of the local flora and fauna: regal herons, wild second harvest blackberries and early morning hippies out for a swim with a van boasting, “I hope your day is as nice as you butt.” You can bet I had a fantastic day — shoutout to my mom for my butt and for teaching which plants are edible when hiking. 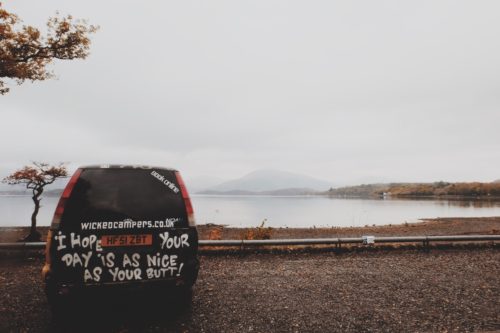 My lunch break was in Rowardennan, which is surrounded by a protected forest of birch trees, a change from the previous day’s pines. On the previous day along the highway I had thought, “Maybe traveling alone had been a mistake, maybe I should have gone with my friends somewhere else and continued the magnificent companionship I shared for so much of my study abroad experience.” But here, my friends were the woods, and I grew more accustomed with just being me.

In college, I lost my appreciation for me-time. Usually I try to spend the majority of my time with people – and as many people as possible. It is not a good thing for my mental health or for the quality time I share with people. I have always been incredibly shy, and the only reason I am outgoing is to overcompensate for being timid. My older sister, the gregarious one between the two of us, seemed to live a life full of people as an outspoken human. She is my hero, so I faked it until I made it into the person I am now. In reality, I have incredible social anxiety. The idea of spending time with people one-on-one is terrifying until we have developed a strong friendship, and even then I can get dubious. I worry that I will not be interesting enough to maintain conversations with people. Social anxiety is very real and happens to people that seem social.

However, with this trip, I deeply enjoyed my solitude. While the second day was beautiful, I found myself wandering through my thoughts more than the landscapes in front of me. Ideas about the future, nostalgic remembrances and appreciation for the many wonderful humans in my life. I am so incredibly lucky to be where I am now, and so much of it is due to the beautiful chosen family — and blood-related family — I have now. I achieved contentment.

To my friends: I would like to spend more time with you one-on-one.

To me: alone time is wonderful and nourishing, and one should not be afraid to spend a few days with their own mind.

Around sunset I started getting extremely tired. I texted my boyfriend (side note: this kid is a champion, he checked in with me every few hours making sure I was alive and okay) that I was getting “real tuckered” and decided to pitch my tent. In Scotland, wild camping is legal, so I set up camp on a moss covered outcropping that looked out over the lake and watched a pleasant sunset.

Around 8 p.m. I heard rustling all around me. I thought someone or something was approaching my tent. Then I heard tapping from all sides. I was petrified. I did not breathe. I did not move. For over a minute I rested, completely motionless, until I realized it was rain. So perhaps I was not completely at ease being totally alone, but almost. That night was incredibly cold. The wet ground combined with sleeping on essentially a rock and a sleeping bag that maybe was not as warm as it needed to be led to a restless, but still enjoyable, night.

The next morning I awoke at 5:30 a.m., convinced myself to continue sleeping and finally opened my tent around 6:30 a.m. It was still freezing and very wet. However, through the haze that is Scotland’s grey mornings, fingerlings of pink began shyly creeping through the fog. The birth of a beautiful sunrise. Quickly, I ran to find an ideal spectating spot: a tiny rock almost in the water, but perfect for my breakfasting gaze. With my granola and coffee in hand, I sat awed by nature for the next hour, graced by the beauty of the world. In the true habit of nature, this ephemeral spectacle lasted only until the sun rose above the peaks, returning the sky to its natural haze. 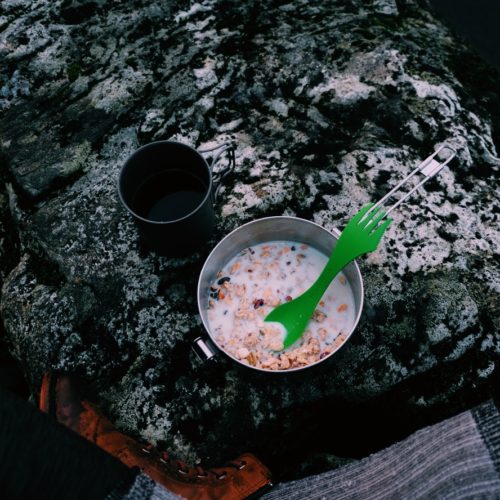 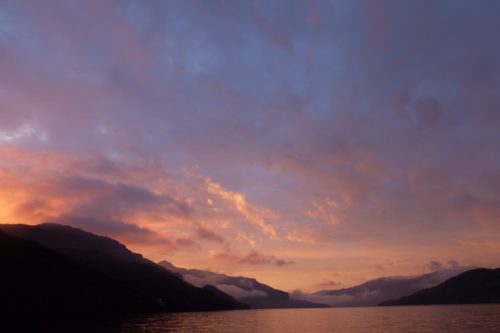 Due to the cold from the previous night, the fact that it was supposed to be 10 degrees colder and raining the next night, I decided that day three would be the end of my journey. In my seven miles until the next bus stop, the landscape quickly convinced me that Lord of the Rings was actually filmed here, and not in New Zealand, proven by mossy ruins of previous buildings, oak leaf tables and mushrooms carved into trees all along the way. 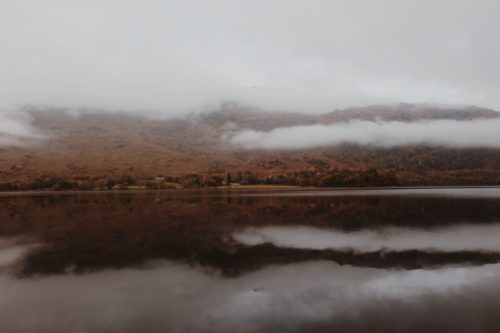 I caught a bus to Glasgow in the afternoon, leaving my trail shoes in the bus stop bathroom because they were destroyed by mud and determination. Loch Lomond and the West Highland Way will forever maintain a magic spot in my heart.