After this weekend, I believe in love at first sight.

And no, I did not fall in love with a handsome Argentinian gentleman, although that would be cool.

On a whim, some friends of mine and I decided to spend this weekend in Argentina’s capital and arguably the most beautiful city I have ever visited: Buenos Aires.

We arrived on a very rainy Saturday morning, two of us flying into Aeroparque and the other three taking a bus from Córdoba. With friends from the hostel and from AIESEC, the organization facilitating our exchange in Córdoba, we represented four countries: Mexico, United States, France and Scotland. Needless to say, it was a fun weekend.

We met on the steps of our home for the next three days: a flat we rented from a gentleman named Alberto on Airbnb. Given the fact that we reserved the apartment the day before we left, we got really lucky. The apartment was sprawling, with two large bedrooms, two full bathrooms, a kitchen, a living room and a balcony with a view of Palermo, the neighborhood we lived in and one of the nicest neighborhoods in Buenos Aires. 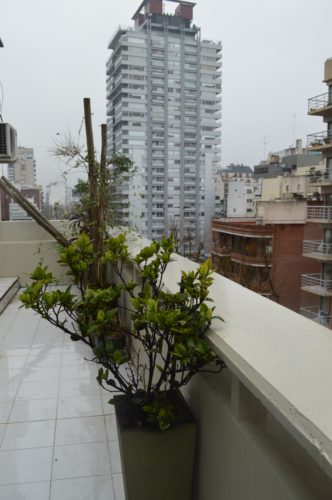 After unpacking and congratulating ourselves on somehow scoring such an awesome apartment, we did what anyone would do upon arrival in one of the most recognizable and beautiful cities in the world: we ate McDonalds. Somewhere, someone is rolling in their grave.

That night, Saturday night, we took a taxi to La Recoleta, an ancient cemetery in the city. We ran through pouring rain (seriously, downpour) to the shelter and warmth of McDonalds, where we enjoyed cheeseburgers, french fries and horrible coffee before venturing back out into the storm. To our dismay, we discovered that La Recoleta had actually closed for the night as we were eating our five-star meal, so again, we hopped in a taxi, bought a couple bottles of red wine and beer at the supermarket next to our apartment, and spent the night listening to music, laughing, drinking and eating. Despite the cold rain outside, it was a wonderful night. 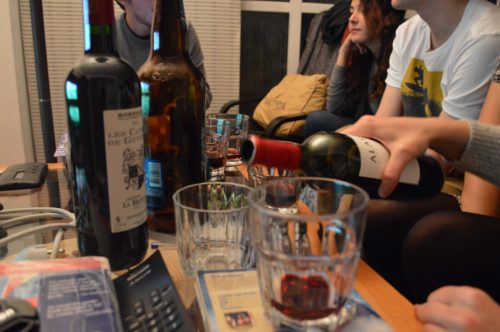 Sunday morning appeared with cloudy skies but no rain, so we embraced the lack of wetness and decided to try visiting La Recoleta again. This time, the cemetery was actually open, and we spent an hour exploring the massive, ornate graves of people long-gone, the mausoleums adorned with impressive statues, stained glass and twisting iron. We walked through the narrow alleyways of the cemetery, peeking our heads into crumbling tombs and speculating about the histories of the people inside of them.

Sunday night, after culminating our creepy tour of La Recoleta (thunderstorm + cemetery = ominous), we headed to San Telmo, another neighborhood in Buenos Aires, to experience its famous Sunday afternoon street market, the Feria de San Telmo, where you can buy everything from cups for yerba mate to magnets to underwear. We wandered through the neighborhood, admiring some of the artisanal crafts and laughing at some of the tackier ones (think: t-shirt that simply says “Buenos F****** Aires”). We finished the night with an amazing dinner and a bottle of Malbec at a small restaurant in San Telmo, leaving very happy, very tired and very full. It was the best meal I have had in a long time. 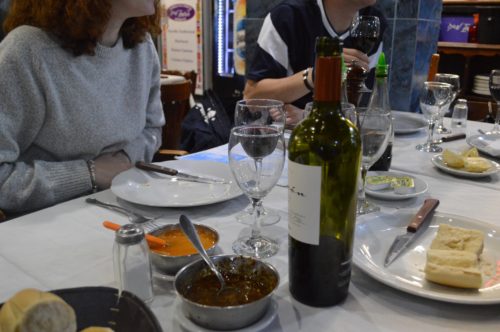 Monday, our last day in the city, began with an hour-long bus ride to La Boca, a neighborhood that is known for its brightly colored buildings and the fact that it sits right next to the ocean. We walked down El Caminito, the main pathway, and took pictures next to the colorful buildings and the statues of men and women waving from the windows of the homes on either side of the cobblestone street. The brilliant colors of the buildings were a stark contrast to the dark skies and foreboding rain and thunder. 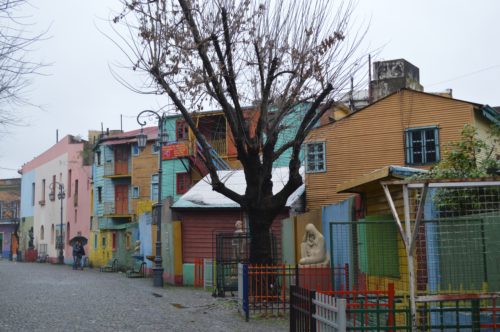 We ate lunch at a small restaurant in La Boca, a couple streets off of El Caminito, and enjoyed empanadas and milanesa. Trying each other’s food without asking like best friends of ten years, we chatted and joked, grateful for a weekend away from the noise of the hostel.

La Boca is home to the stadium of the Argentinian soccer team La Boca Juniors, so following lunch we walked a couple blocks and came across the stadium, a huge mass of blue and yellow concrete. Two members of our clan paid and entered the stadium to see the inside, while the other three explored the surrounding streets, poking through souvenir shops.

After La Boca? Home. Reluctantly, we caught a bus back to our apartment, packed up our things, and went our separate ways: some going by bus back to Córdoba, and others by plane. I watched Buenos Aires disappear as I ascended into the clouds, and I was surprisingly sad about having to leave. I fell in love with the city, and if it were up to me, I wouldn’t have left so soon. Don’t get me wrong, I love Córdoba, but there’s something about the statues, towering buildings, curving roads and European-ness of Buenos Aires that is so enchanting.

Buenos Aires, I will see you again.