If you like snow, red wine and the Andes Mountains, I would strongly recommend that you visit Mendoza, Argentina.

Mendoza, famous for its Malbec and ski resorts, sits in the west of Argentina and shares a border with Chile. The city is a cheap 10 hour bus ride away from Córdoba, so this weekend a couple of friends and I took advantage of the long holiday weekend and made our way to Mendoza.

We arrived around 7:30 a.m. on Saturday morning after a long and boring bus ride. The city was quiet, much more quiet than the bustling Córdoba that we are accustomed to, so after dropping off our luggage at the hostel, we explored, took in the silence and the morning sky and made our way toward the main square in search of breakfast.

Eventually, we stumbled across an open café (nothing ever seems to be open in Argentina, ever) where we enjoyed coffee, medialunas and orange juice. It was a welcome meal after a night of traveling.

Since we only had about two days in Mendoza, upon returning to the hostel, we immediately began planning how we were going to spend those short 36 hours. We settled on winery tours on Saturday and an excursion into the Andes on Sunday.

Having a couple of hours to spare before we left for the winery tours, we changed and walked back into the city to experience Argentina’s independence day celebrations in Mendoza’s main square: Independence Square.

The square was loud with music and conversation and decorated with ribbons, banners and flags of the Argentinian blue, white and yellow. We each bought a flag and made our way through the square where a market was set up. We admired handmade jewelery, glassware, clothing and bags and bought gifts to bring home to our families. After seeing all of the booths and buying some empanadas, we returned to the hostel, ready to begin an afternoon of wine tasting.

Mendoza is a region famous for its production of Malbec, a red wine. We hopped on a bus and drove 20 minutes out of the city, where we stopped at three vineyards and one olive oil factory. We toured the wineries, learned about the process of making wine and then the best part: sampled some wine. I bought a couple bottles to bring home (spoiler alert mom and dad). 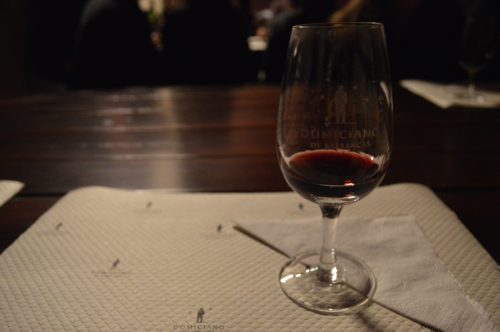 Later that night, after a couple glasses of wine and a lot of laughter, we came back to the hostel and went to bed happy.

Sunday morning arrived, and with it we arrived in the Andes Mountains. We woke up very early, got on a bus, and a couple hours later we were snaking through the enormous, snow-covered mountains. It was breathtaking, as well as the first time I had ever seen snow in the middle of July (Christmas in July, anyone?). The whole thing was beautiful.

Our first stop was at a lake hidden between the mountains, where we stopped and took lots of pictures. Next, we stopped at Puente del Inca, a small piece of civilization in the middle of the mountain range, where we gazed over hot springs, an old church and the ruins of a past earthquake. Our final stop was at Penitentes, a ski resort. Since we didn’t have enough time to ski, we ate lunch in a lodge at the base of the hill and admired the mountains towering over us. It snowed the entire day, and it was lovely.

After a too-short weekend of wine and snow, we hopped on yet another bus and made the 10 hour journey back home to Córdoba with visions of sugarplums.