Skip to content
[dropcap size=small]I[/dropcap]t’s crazy to think that I left home almost two months ago! There are so many things that you plan in your head and expect on such a huge adventure like this, and then there are many other things that happen that you could never imagine in a million years. One thing that I was most excited about when coming to Australia was the ACCENTS! Accents are so fascinating to me, and I just love them! I figured that I would just be intrigued by the accents every single day until I went back to the States. Of course, they are still the coolest, but I’ve become so accustomed to them that I hardly realize that everyone around me is speaking in an accent anymore. Different sayings and spellings seemed so strange to me a month ago, but now they are becoming second nature. Being immersed in a culture that only varies minorly from the life I’m used to has made a much bigger impact on me than expected, but I kind of love it! It’s really neat when my American friends or me say something that we never would have said in the States, such as “I’m keen to go” or “There are heaps of restaurants to choose from!” Now those might be the most common (and the only ones I can think of right now…), but the subtle differences that are starting to become more apparent really fascinate me. Before I left, I was imaging all of these crazy exciting things I’d be able to do, but I never really imagined how they would make me feel. But last weekend I went with a school club to Moreton Island. 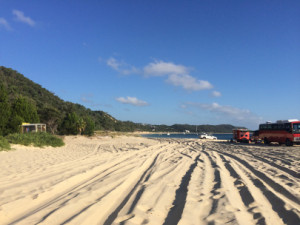 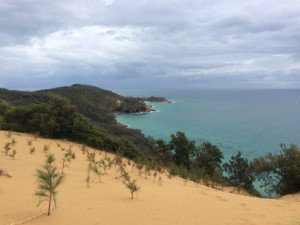 Moreton Island is a giant island made almost completely of sand. We had big, four-wheel drive buses that took us around the island’s roads (also made only of sand). These rides were one major source of excitement on the trip, to say the least… If you think you’ve ever been on a bumpy bus ride, think again: These buses flew you around, back and forth, as they drove through the soft sand. Our bus would get stuck so often! It even broke down in the middle of the island on the way to the ferry at the end of the weekend. We almost missed the last ferry out and would have had to stay an extra night on the island (which would have been completely fine by me), but another bus came back and got us just in time to make it to the departing ferry. Back to the island, though—the water just takes your breath away with its fading colors and beautiful sea creatures. 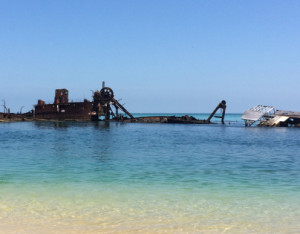 We saw an abundance of starfish and even some sea turtles while snorkeling! At the end of the first night, some of my friends and I went down to the beach to stargaze. These stars were almost as perfect as the ones I saw in Fiji. It is insane how you can see millions of clusters of tiny stars behind the normal stars we see every night. 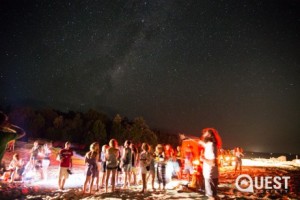 As we were watching the stars, we were approached by other people on the beach who were having a bonfire. One was twirling fire and asked if we wanted to learn—of course we did!

Just imagine being on the beach in Australia, staring at the stars, surrounded by a bonfire, listening to some great music, twirling fire and spending time with new and “old” friends that just make you smile. This is one thing that I was never able to imagine before coming here. I could imagine what the beach would look like and what kind of activities we might do, but I could never have imagined the pure joy I would feel when I was surrounded by such beauty and so many new adventures. I just got back from a weekend in the Gold Coast with my friends Caitlin and Katie. Katie is from the Gold Coast, so we spent the weekend at home with her parents. It reminded me of a normal summer night back at home. We had a nice barbeque that her dad cooked up and just sat around outside chatting for a long time. It wouldn’t be a normal summer night without a trip to Yogurtland, though—yes, you read that right. YOGURTLAND. They have the exact same Yogurtland on the other half of the planet. Same flavors, same cups, pretty much the same everything. I was also able to do one more thing that made me feel like I was back at home enjoying a nice summer night: DRIVE. And speaking of that, Caitlin and I are heading to New Zealand in two days! We are driving around the South Island for ten days, so we figured we should have some practice. Thankfully, Katie’s wonderful mom let us practice driving around in her car. Caitlin and I would switch off driving anytime we got in the car. We drove to lunch, to the beach, to get froyo and just around town. I’m not sure how familiar you all are with Australia, but the reason we need to practice driving was because we drive on the opposite side of the road here. (We didn’t just forget how to drive in the two months we have been away from home.) Driving on the other side of the road was very weird at first, but you get used to it pretty quickly. It definitely takes more effort to focus on driving on the left, while also checking your mirrors and making sure you aren’t speeding. It is definitely worth it, though, because I really like driving. Also, don’t forget that the speed limit is in kilometer pers hour, not miles. I saw a speed limit sign that said 110 when we were on the highway and another that said 50 in a more residential area. At first, I was a little freaked out, but then I just got used to it. Also, the turn signal is on the other side, so I accidentally kept turning the windshield wipers on when I was meaning to signal that I was going right. I think Caitlin and I are much less worried about driving around New Zealand now, so thanks, Katie’s mom!

One more way that I’m adjusting to the Australian lifestyle: sidewalks. Sidewalks are no different than the road—walk on the left side or you’re wrong! Now, just as in the States, not everyone follows this unwritten rule, but when you pass someone, you should go to the left. Now, I’m used to it, and I always walk on the left side. It still is weird every now and then, but it’s just another fun little thing that reminds me I’m in Australia. I think I’m going to get back to the States and everyone is going to get mad at me because I’m accidentally going to walk on the “wrong” side of the sidewalk! Oh, and they don’t even call them sidewalks… If only I could remember what they are called here. I think footpaths. Yeah, I’m pretty sure they are called footpaths.

Well now to prepare for the next adventure: NEW ZEALAND! I’m looking forward to writing a post (that will probably be way too long) about all our adventures in one of the most beautiful countries in the world. I’M SO EXCITED!