For most LGBTQ+ people, coming out is not a one-time event. I’ve been out of the closet since I was 15, but I come out to new people every single day, whether I want to or not.

However, coming out in cultural context falls behind visas and vaccinations on the list of concerns when traveling internationally. Often, organizers of study abroad groups fail to realize there may be LGBTQ+ students on their programs and thus inadequately prepare them for changes around the perception of their identity when LGBTQ+ issues arise in conversation.

My first trip abroad was to visit my exchange student’s Catholic family in the northern region of Spain. I don’t remember feeling unsafe; however, I was certainly uncomfortable when my peers employed slurs against gay people.

I was supposed to feel at home there. Instead, I felt unwelcome and out of place. Mix this with the awkwardness of my 16th summer, lazy days and nighttime crushes – my friends never understood why I shied away from the older boys, or got so flustered anytime advances were made. I wasn’t eager to explain, fearing isolation and rejection.

Flash forward a few years, and I was preparing to go to Moscow, Russia through a scholarship program. I remember quietly pulling my program coordinator aside and telling her, “I have a girlfriend. Will my host family be upset? When I call her, should I speak Spanish?” She responded, “You can call your friends in English, you don’t need to be secretive!” I turned scarlet as she stutter, realizing I meant “girlfriend” in a romantic sense.

My time in Moscow was confusing, and I felt the very real fear of being queer in a country where displaying pride flags is done in secret. To add to my discomfort, my hosts vehemently denied the naturality of same-sex relationships. And after a violent assault on a student’s gay host brother, I felt completely isolated.

Following my trips, I later told both host families I was queer, and surprise ensued. I seemed so “normal.” How could I possibly be gay? They were curious. They wanted to know about how I had known, what my family thought and if I had a girlfriend instead of a boyfriend.

I like to believe that by sharing and explaining my identity, I have played a small part in humanizing homosexuality to a handful of people. 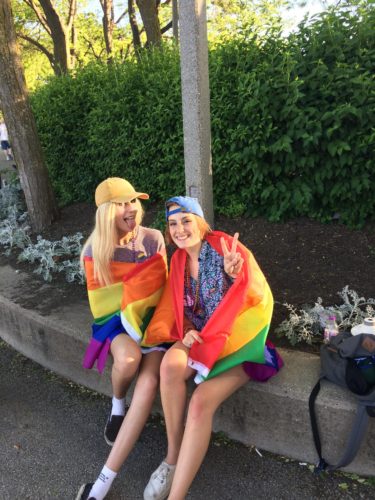 To all of my LGBTQ+ family: don’t let anything stop you from traveling. We belong here. We have every right to exist and enjoy our time exploring this planet. We owe it to our oppressed community abroad to serve as positive images of the LGBTQ+ community. Don’t put yourself in direct danger, but don’t let fear stop you. Consult the State Department’s travel warnings before planning a trip and take the necessary precautions. But be rest assured wherever you go, you’re never alone.