Russia is a seemingly lawless place. It is a great expanse of mass and time. It is unique to each individual who claims it as their mother.

I called a tamed section of this wilderness home for a summer. Coming home, the questions asked about my travels always invoked Soviet era spy dramas and an obscene amount of alcoholism. I am here to clear up the confusion. Here is the story of everything Russia is not.

Russia is not the USSR. Russia today s a place, as she has always been, full of immigrant families, a thriving underground music scene, and an excess of economic inequality.

Russia is not a radioactive wasteland. It is a semi-developed country with a thriving capital and western half. Although economic inequality across regions and classes is great, people make do and compromise in surprising ways.

Moscow is not a cold city with stone faced citizens. Old women will scold you for donning shorts, newspaper vendors will chat you up as you head to class, and if you speak even an ounce of Russian, you’ll pay half the price for your rubashka.

Russia is not a violent place, although there is violence. Most people are passive and well- versed in the politeness of public transport. At times, as shocking as it is, you witness a bout of street violence – usually domestic – which rattles your bones and leaves you aching for home. There are police everywhere sporting submachine guns which are seldom used.

Russians do not sustain themselves solely on Smirnoff. There are a variety of drink options varying from the traditional slightly fermented kvass to the liter sized bottles of beer which feature a jovial, though slightly jaundiced, bear on front. 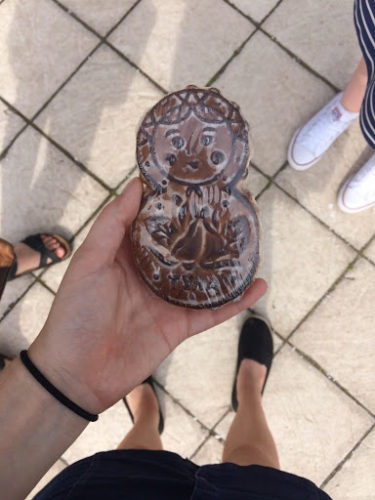 Nor do Russians devour beets for every meal. With a country crossing 11 time zones, there are a variety of regional specialties. Many people have dachas, small farm homes located outside of the city, where they go to “relax” by tending to sprawling gardens full of dill, mushrooms, and currants. Flavors may be unexpected. Flavors from all of Central Asia are well represented. The best selection you make will likely be a drunken, 2am shawarma your host mom specifically advised you to avoid.

Russia is not lacking the things most people expect. It is rich in laughter echoing through impeccably kept public parks. It is rich in a language as complex and time weathered as its inhabitants. It is rich in emotion – sorrow, suffering, and shadows of the past – all warded off by the sun of a new day. 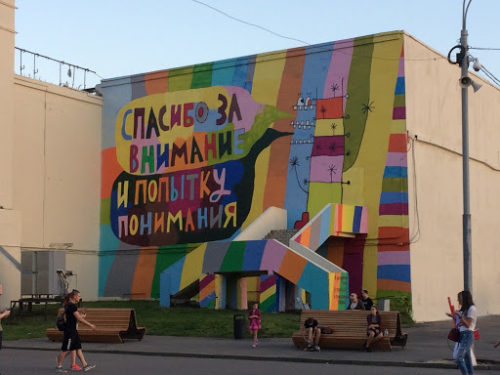 This mural reads “спасибо за внимание и попытку понимания” or “Thank you for your attention and attempt at understanding.”