Twenty-four hours in Paris. That’s all I got.

Granted, I know that I will be back in a few months but those 24 hours meant a lot to me.

My good friend from home is studying in Paris, and I hadn’t seen her in person in such a long time. When she messaged me that Harry Styles, a man and musician we both admired from a young age, was having a concert in Paris but she didn’t have anyone to go with, I immediately pulled up Skyscanner.

It was a bit tricky, time-wise. The day of the concert, I had class in the morning, then took a train to Manchester airport. I ran through the terminals and hopped on my flight. I landed in Charles de Gaulle airport in Paris, impatiently tapped my foot as I waited in line at border control, checking my watch. I ran through the airport again – I had to change my shoes to do this properly – and through a train station. The train was delayed and packed like a container of sardines, and when it eventually arrived at my stop I scrambled off. 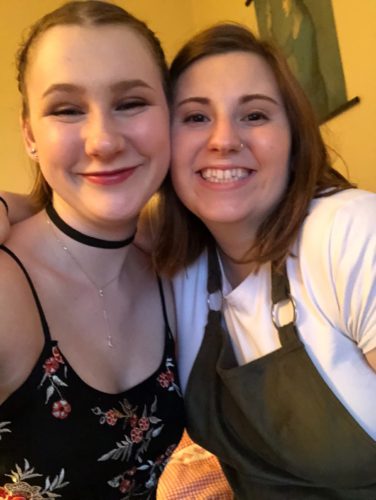 For those of you who grew up One Direction-less or could care less about Harry Styles, let me just say this: listen to his solo album and I think it will change your mind. For those of you who are reading this and thinking “Ugh so lucky, I love him:” I am totally with you here, it was fantastic from start to finish. Even waiting in the arena was fun. I don’t even speak French, but I felt at one with the audience and it was such an experience.

I don’t get to go to concerts very often, let alone in a different country. It was a different kind of experience, as I often didn’t understand what was being said around me. Harry Styles also spoke a bit of French to the audience and I screamed merely because of who was saying it. The most iconic part of the concert, besides the amazing music, vocals, lights and dancing, was that for some reason Harry Styles’ favorite word in French is “pamplemousse.” My friend told me that it means grapefruit, and was completely random. However, this world-famous musician in his mid-twenties found it so funny that he made the entire arena scream it as loud as possible. Was I pronouncing it wrong? Yes. Did I care? No.

Something strange, standing on the floor of an arena, surrounded by lights and screaming and a language you cannot speak, and all joining in to scream “GRAPEFRUIT” simply because we all love this artist and he thought it was funny. A very weird memory, but one that will stick with me nonetheless as a beacon of the amazing experience.

Afterwards, we went back to my friend’s apartment to sleep for a few hours before I had to repeat in reverse my slightly hectic travel plans. After all, I had homework to get done that next evening!

So yes, only twenty-four hours in Paris. It was spent with a great friend, a great star and an arena full of French girls. Time well spent, in my opinion – plus I got to see the Eiffel Tower, as it was visible from my friend’s bedroom. Score! See you later Paris, and for longer next time – I promise. Who knows – maybe see I’ll you later too, Harry.