They come by the thousands, single file as if they are following a military order. They come with a purpose, with great determination and a plan. They are warriors, protectors and servants to their mighty queen. They rule the community of San Virgilio from deep below the jungle floor to the highest trees. They work day and night, rain or shine to build their homes, feed their families and defend their jungle. With razor-sharp pincers that slice like a knife, they are feared by some of the largest creatures of the Amazon rainforest.

From the moment I arrived in the community of San Virgilio, I noticed that this beautiful stretch of the Ecuadorian Amazon was ruled by las hormigas: the ants. They far exceed the community members in number and in the land they inhabit. Their diligence and intense work ethic is a sharp contrast to the tranquility and peace of the San Virgilians. The San Virgilians welcomed me to their community with a tobacco plant cleansing ceremony to remove the bad energy from the city and protect me from malaria. After being cleansed and getting my face painted with natural plant dye, my journey into the Amazon began. 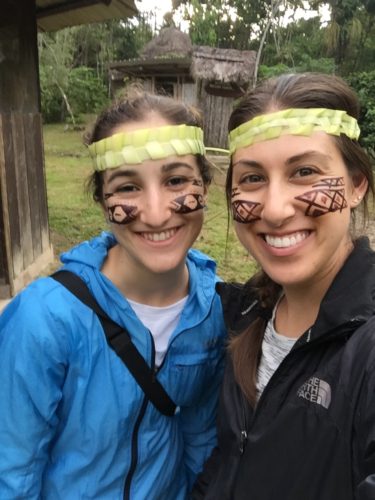 The next few days I became a part of the community, learning about their medicine, cuisine, cultural practice and love for their land. The people of San Virgilians believe they are the richest in Ecuador, as they have everything they could need to survive right on their land. Nestled two hours away from the nearest city, San Virgilio feels like a different world than the rest of Ecuador. A world with so many new sounds, and the lack of so many familiar ones. The people of San Virgilio embrace modern technology such as electricity, modern medicine and even smartphones; however, they prefer to live more peaceful lives in the silence of the Amazon. Strict gender roles define the daily activities of the San Virgilians: women cannot touch the sacred flute or it will break, while men who make pottery will lose the ability to have relations with their wives. The women sit and make pottery, as the men play them a song on the sacred flute to make sure they don’t get sad.

We may think that the San Virgilians rule the land, but they know this is not true. Their melody is merely background music for the marching of the ants, back and forth from their nest. They invade the cabin I am staying in, clearing out all the dead bugs from the night before, ignoring my presence, knowing the jungle is theirs. They retrieve their “prizes” as the San Virgilians call it, and hurry back in perfectly straight lines to surprise their queen. They feed their queen until she is large enough to lay her eggs and fly into the air once a year. The day the ants fly is a special celebration for the people of San Virgilio, while the ants command the jungle the rest of the year, this day they have a plan to be on top. The men of San Virgilio gather at 5 a.m. after drinking their Guayusa, to prepare to capture the flying queens. These captured queens are a special treat when fried over the fire, something the San Virgilians wait all year for. The week I was there was the exact week that the ants were flying, so I was able to get the full Amazon experience.