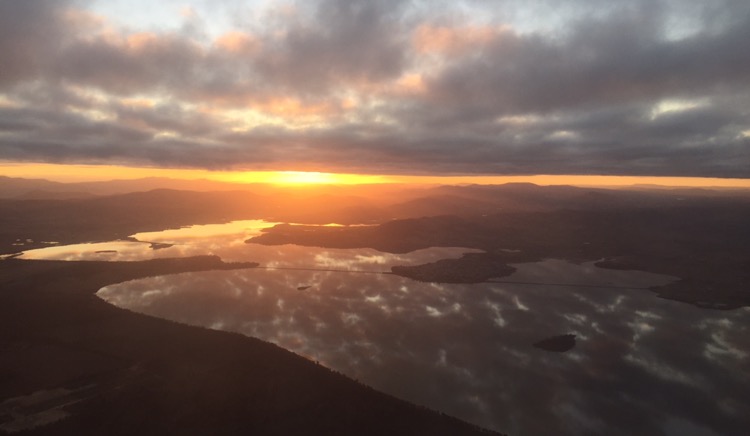 I was in Hobart, Tasmania in the middle of June: the heart of winter for our friends Down Under. I had flown in from Melbourne earlier that day with my friend Victoria and after exploring the town, we settled into our hostel. I had been rather hot throughout the day, wearing an otherwise agreeable vest and sweater combination and decided to leave my vest in our room. This would prove to be my first mistake of the day.

Hobart is located at the base of Mount Wellington, and as we were only in town for a few days, we wanted to get up the mountain as quickly as possible. We inquired with a tourist agency the best way to reach the top and were delighted to find that a bus was leaving for the peak in just 15 short minutes, with another leaving in a few hours. Once at the top, we had the option to either take the bus back down or to make the three-hour off-road hike. Being the adventurous tourists that we were, Victoria and I were certain that the latter was the choice for us.

With nothing but my aforementioned sweater, leggings and a pair of Sperrys that were ever prepared for adventure, I was ready. Victoria, donning just a sweater, jeans and a trendy pair of boots, opted to purchase a hat before our departure. Being from Louisiana, this was the sensible thing to do. When the other adventure seekers questioned my dress, I all too confidently boasted that I was from Minnesota, where we’re born with ice in our veins. We continued to shock our travel companions when they learned we were planning on hiking down Mount Wellington. Their disbelief should have forced Victoria and I to question our upcoming endeavor, but it only seemed to fuel us.

As the 30-minute drive up the mountain progressed, it came to my attention that snow was becoming more and more prevalent. I again took comfort in my Minnesotan upbringing, though, and any concerns of mine dissipated almost immediately.

Upon reaching the top of Mount Wellington and exiting our bus, I did notice that it was somewhat cooler than at the base of the mountain. This is to be expected at 4,000 feet above sea level, near the South Pole. Nevertheless, I persevered.

The view was truly quite spectacular, causing me to dismiss the once menacing prospect of wind-chill as negligible. Wind cutting through my sweater, I gazed over Hobart. We made our rounds along the top, with the common members of the “driving group.”

Victoria and I decided a trip to the bathroom before our three-hour descent was in order. In hindsight, I should have been wary of the amount of time we spent in that indoor bathroom. Though how could I know then that it was the heating that lulled us into a lengthy chat near the sink?

Finally, it was time. The bus would leave in about 10 minutes, and we began our journey. Spirits were high. We walked happily along the snowy path, truly in tune with nature. We were as jovial as any two girls could be.

Flash forward about five minutes. Slowly but ominously, our adventure began to take on a new air. The tread on my Sperrys now seemed unfit for the ice that hid beneath the snow, preferring instead the harbor in Hobart itself. Victoria’s boots, too, did not seem to be fairing as well as we had expected. Our shoes were soaked and our feet cold. Still, we carried on.

Then, suddenly, things took a turn for the worse. After recovering from a few close calls, Victoria’s footwear finally failed her. She hit a patch of what I can only assume was black ice and went down hard. This was devastating for morale; in that instant, we both realized we had made a terrible mistake. However, to save face, we lingered for a few minutes contemplating our next move.

After an appropriate amount of time had passed, we both agreed we should make our way back to the bus. We turned around, reassuring ourselves that had we been more prepared, we would have indeed continued the trek.

To our horror, when we returned to the parking lot, the bus was nowhere to be found. We had missed it by a matter of minutes (as our hike hadn’t lasted long) and were now faced with the daunting reality that we would have to walk down the winding road. After some rough calculations with my two fingers and a tourist map, I guessed that it would take us about 8 hours to reach the bottom of the mountain. Nevertheless, we had no choice but to begin our descent.

For an hour or so, we were filled with an unexpected sense of optimism. We laughed at our folly and took solace in the fact that as we descended, it would necessarily get warmer and the snow would eventually melt away.

As that hour came and went, the snow did not, in fact, melt away.

Additionally, not only was the sun beginning to set, but the second bus from the tourist agency was sure to be making its way up the mountain shortly. After our foolhardy claims on the way up, we could not risk being seen by the bus driver. That would be the ultimate humiliation.

We knew we had to get back to Hobart, and fast. After some deliberation, we agreed that hitchhiking would be our best option. Calling a cab would be egregiously expensive and continuing our walk was out of the question. We resolved that Australians are a generally peaceful people and the chances of any harm coming our way was minuscule and greatly outweighed by the certain shame we would feel if the bus driver were to see us walking along the road. We contemplated telling our future rescue team that we were Canadian, so as not to confirm any preconceived notions about “ignorant Americans.” After bouncing our Canadian accents off each other for a short while we decided against it.

After getting off to a rather timid start, Victoria and I both boldly stuck our thumbs in the air, as hitchhikers are accustomed to do. As the first car approached, driven by a couple with an open backseat that could easily fit the two of us, my adrenaline reached an all time high. This was it; we were saved. I could feel my blood

finding its way back into my toes already. Then, nothing. The car didn’t so much as slow down to look at us. My pride was shot. We were forced to continue our descent on foot.

Car after car flagrantly ignored us, despite our obvious despair. Night continued to fall, fewer cars were out, and the second bus was undoubtedly near.

Then, by the work of what I could only assume to be of some higher power, a car began to slow; hope was instilled. Somewhat dumbfounded, we did not move at first. When we realized what was happening, though, Victoria and I rushed into the car and did not think twice about climbing into the back seat.

To our good fortune, it was an old Aussie couple behind the wheel. After getting acquainted (and forgoing our Canadian accents), we explained the peril we were in. To make ourselves seem less thoughtless, we told the couple that our bus had left without us, by no fault of our own. They were astounded that a bus driver could be so careless. We concurred. We drove about 25 minutes with our new friends, and were kindly dropped off at a hotel with a bar.

Victoria and I decided we deserved a beer and some bar food, this allegedly taking precedence over our wet and cold clothing. We reminisced on our little adventure until finally returning to our hostel.

In the following days, we returned to Sydney, where Victoria and I were both studying at the time. We vowed to tell only a select few of what happened that fateful day in Tasmania. However, we would eventually find humor in our excursion and chalk it up to being “one of those things.” Mistakes were made. I can now only hope that I learn and grow from my actions and in future endeavors elect to keep my vest on my person.